For the last 50 years, the golf course has been maintained by the City and, because of the easy access off the 79th Street causeway, Normandy Shores became the perfect spot for Miami Beach, Miami, North Miami and Miami Shores golfers to enjoy a round.

From that point on, the City of Miami Beach worked hard to dredge and haul in fill to create the man-made island for the golf course. On July 28, 1937, Howard Toomey and William S. Flynn were employed as the golf course architects. By 1939, the dredging efforts had successfully created Normandy Shores Isle.

Shortly thereafter, most of Miami Beach was transformed into a training camp for the U.S. Army–Air Forces during World War II with 85% of the hotel rooms leased by the military to serve as barracks. The years of the Post-war Boom were Normandy Shores Golf Club's heyday. Around 1956, the City of Miami Beach hired Mark Mahannah to redesign the golf course.

Once the renovation was complete, Normandy Shores became a hot spot for both the famous and infamous. The famous: Sam Snead, Arnold Palmer, and Peter Thompson were just a few of the now legendary professional golfers that played Normandy Shores on a regular basis. Some of the other regulars went by names like Stork, Charlie the Blade, and Three-Iron Ward.

For the last 50 years, the golf course has been maintained by the City and, because of the easy access off the 79th Street causeway, Normandy Shores became the perfect spot for Miami Beach, Miami, North Miami and Miami Shores golfers to enjoy a round.

Fast forward to 2008, the City of Miami Beach has spent over $9 million to renovate the now spectacular Normandy Shores Golf Club. The City hired my golf architectural design firm, Arthur Hills / Steve Forrest and Associates to redesign the aging course and bring it back to its current state of glory. We removed every blade of grass and most of the invasive species of trees at Normandy Shores. The tees, greens, fairways, and bunkers were all rebuilt and reshaped. The lakes were drained, redesigned and refilled, and a modern irrigation system was installed.

We re-grassed the entire site - fairways, tees, greens and rough with environmentally friendly Paspalum and the newly re-envisioned course that we built on the site is very traditional and looks like it’s been there a long time.

Normandy Shores Golf Club co-hosts the annual South Beach International Amateur Tournament every year, and the superintendent says that he gets the greens stimping at a “lightning fast 11”.

Semi-private but open to the public for daily fee play, Normandy Shores is a stalwart of the Miami’s golf resort district. When asked about signature holes, its loyal members will most often tell you that holes #6, #9 and #17 are their collective favorites.

Perceived as being an easy hole because of its short length, the 369-yard, par four, 6th hole is one of the favorites with the members at Normandy Shores Golf Club.

Perceived as being an easy hole because of its short length, the 6th hole is one of the favorites with the members at Normandy Shores Golf Club. Most golfers don't play from the back tees and, therefore, only have around a hundred yards to the green for their second shots, making this short par four a real birdie opportunity for most golfers.

With a couple of pot bunkers guarding the left side of the fairway off the tee, the smart play is to hit your tee shot toward a landing area just right of the first bunker. You will be left with a second shot of about 100 yards into a slightly elevated and well-contoured green protected by a bunker on the right.

Much like a classic, 19th-century punchbowl design, the sixth green sits in the surrounds of amphitheater-shaped mounding.

But remember, there is water 25 yards past the green, so be careful not to hit too far or you'll get wet!

The 9th and 18th holes run side by side back toward the clubhouse and share an expansive tee box for their back tees.

Rated the 7th hardest hole, the 9th hole is a strong finishing hole for the front nine at Normandy Shores. The 9th and 18th holes run side by side back toward the clubhouse and share an expansive tee box for their back tees. Both holes do, however, have their own multiple sets of forward tees and are very much in accordance with the USGA’s “Play It Forward” initiatives.

The ninth hole at Normandy Shores is a long and narrow par 4 that will require your best tee shot. There is water on the right side of the fairway, just ahead of the ninth tee, but you must also watch out for the water hazard which can come into play on the left side of the landing area.

And, oh, be careful not to go right off the tee because much of the right side of the fairway is bordered by very dense and very tall pine trees that are difficult to get out of! A tee shot hit even with the fairway bunkers will leave a second shot of about 150 yards into an elevated green that is protected by three greenside bunkers.

The ninth is also one of the hardest greens to hold on the golf course due to the fact that everything runs back to front, with a bit of a run-off into a collection area on the right side of the green.

"The 17th is a tough par 3. An accurate tee shot is required to hit this green that is guarded by three bunkers and water hazards to the right and behind the green.

Playing at a very long 240 yards, this green is very hard to hit from the back tees. Though rarely used, you will see better golfers going back there to play this hole from the tips. There is a water hazard in front of the back tee and there is also water guarding the right front of the green. And if that isn’t enough, there is also water behind the right side of the green.

The 18th green at Normandy Shores Golf Club is seen here in the foreground and the 9th green is in the background.

Playing at 529 yards from the back tees, #18 is a short par five, making it a birdie hole, but also an appropriate finishing hole for the back nine at Normandy Shores Golf Club.

This is very much a risk-reward hole. Longer hitters may want to challenge the fairway bunker. A tee ball hit over the bunker will leave less than 200 yards to the green. Three well-placed shots on this hole will leave you with a good opportunity to finish your day with a birdie.

Located on a secluded island in Biscayne Bay, Normandy Shores Golf Club is surrounded by the serene residential community of Normandy Isle, just off 71st Street, on the northern end of Miami Beach.

At 6805 yards from the tips and 5082 from the forward tees, its soothing breezes and tropical wildlife provide the backdrop for an enjoyable round of golf for the novice or the pro at the legendary Normandy Shores Golf Club. - Arthur Hills, 2017

Pete Dye is on the cover of the Winter 2016 issue of Florida Golf Magazine. Click here to read it. 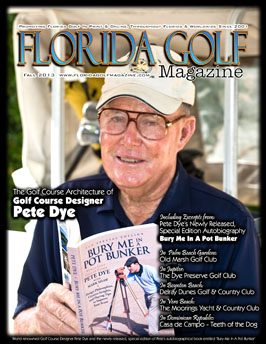 The Florida Golf Architecture of Pete Dye showcased in the Fall 2013 issue of Florida Golf Magazine Click here to read it.

200 Years in the making: The Memoirs Of The Legendary Iron Man Of Saint Andrews

FLORIDA GOLF MAGAZINE, is printed quarterly and delivered to 50,000 serious golfers, including the General Managers of over 1,100 Florida golf course facilities.